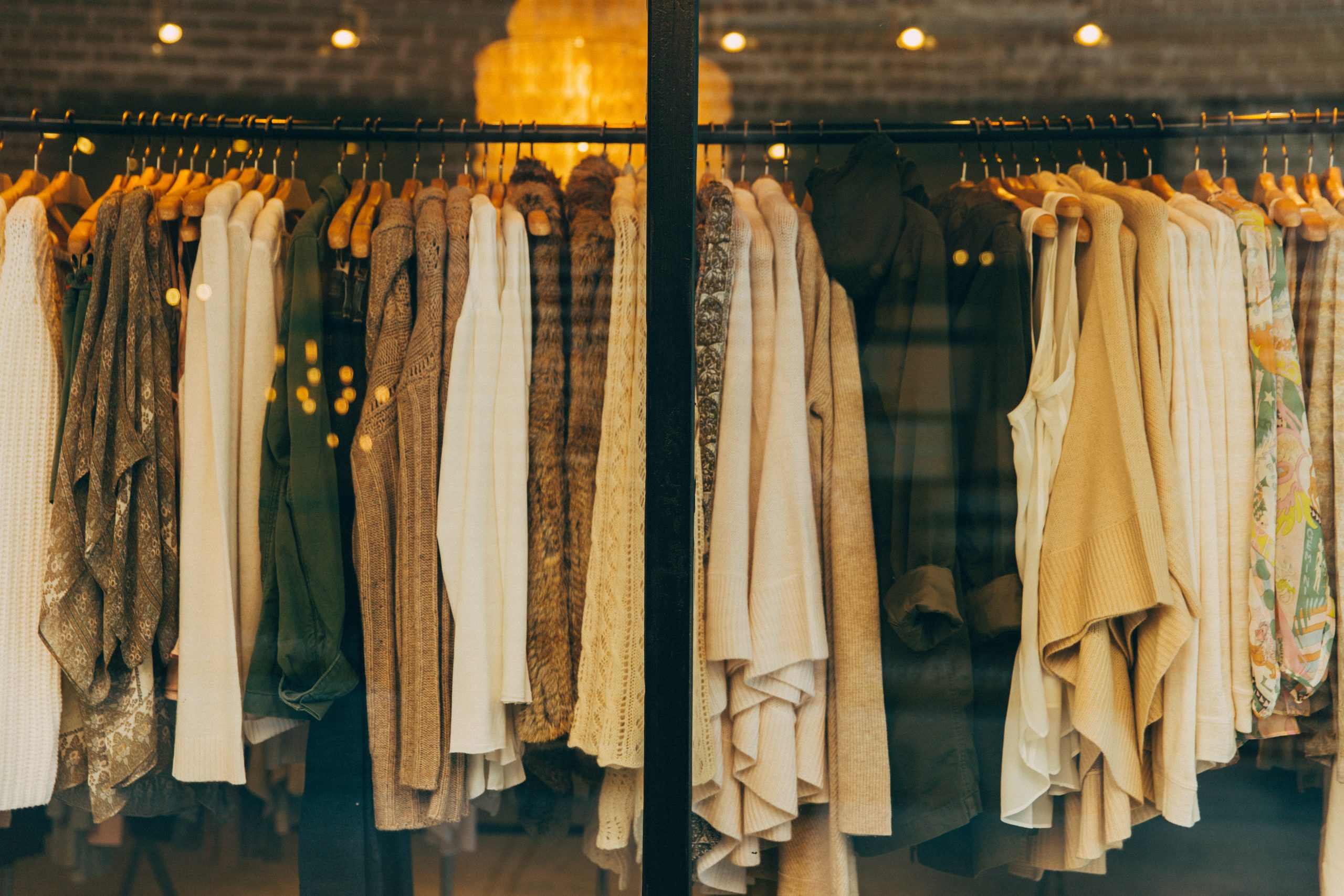 I grew up in certain church circles and heard Deuteronomy 22:5 quoted many times, as there was much emphasis on it. This verse was used by many to forbid women from wearing one particular article of clothing. My mom taught me modesty from a young age, for which I am deeply thankful, but by the time I reached my teenage years, there were changes in my family, and I began to find fashion intriguing. My lines of modesty began to wane. Although I would have still considered myself modest compared to others around me, one thing was certain, I wasn’t dressing to please Christ, I dressed to please myself. It wasn’t until Christ saved me from my blinded self-righteousness, that I began to desire to honor Christ in my dress. I began to care more not only about modesty but about femininity as well.

Scripture addresses clothing and modesty. We can see that God cares about such details, but what God says about our clothing goes much deeper than we think and goes beyond the “one particular article of clothing” for women.

In the past 100 years, our culture’s clothing style has changed. 1920’s dress was different from the 1820’s. As was the 1700’s dress from the 1500’s, and so on. There were times when both men and women wore dresses and robes. At another time men wore short skirts with tights, and women, although dresses to the floor, wore extremely low necklines. There was a time when it was “manly” to have longer hair tied at the nape of the neck topped with a three-cornered hat or even a powdered wig along with long puffy sleeves. My point is: that clothing and style are fluid and often change with time. God did not give us a detailed description of the type of clothing we should wear for all of the earthly human existence other than it being modest and consistent with our gender. So the goal of this article is not to pick a certain period of fashion and promote that as the standard, but rather to see what God would have us do to honor Him within the culture we were born.

“The woman shall not wear that which pertaineth unto a man, neither shall a man put on a woman’s garment: for all that do so are an abomination unto the Lord thy God.” Deuteronomy 22:5

Up to this point, you may be waiting for me to mention the “one particular article of clothing” and so yes, we can talk about pants. Growing up I mostly heard Deuteronomy 22:5 used chiefly to forbid women from wearing pants. The verse doesn’t mention pants, so how do we get that idea? Well for a long time in our culture pants were designed, marketed, and sold as men’s attire only and not women’s. Therefore this verse would have applied to that time. Much in the same way if in the 1400s women wanted to wear tights and shorter knee skirt garments that were only designed for men, instead of the floor-length full dresses that women wore at that time. Deuteronomy 22:5 could be referenced at in both instances.

Because this verse deals with cross-dressing.

This verse is not saying “pants” are men’s clothing nor does it forbid women from wearing them. Because pants, as we know them today, weren’t around in Old Testament times. But one thing is certain, the men and women in that time knew their clothing was different from each other and therefore were forbidden to cross-dress. God hates the muddying of the genders by wearing each other’s apparel. This we know by the definitions we see below.

Men and women are forbidden in Scripture to cross-dress, which we now see much of in our culture with the rise of transgenderism. Men are not allowed to wear women’s clothing, or women wear men’s. This includes all that clothes us, not just the bottom half of our body, like pants. So also coats, shoes, jackets, socks, shirts, and hats must be considered. Sometimes culture changes and certain articles of clothing become feminine by design and creativity, but then again, some apparel may stay masculine. Quick examples: tights, men wore them in the 1400s along with slippers. Today, it is considered extremely feminine to wear tights and especially slippers, which we now call flats. Ball caps, first and only worn by baseball players and boys. Today, girls wear them as a part of cute accessories. Button-down shirts, first designed and sold for men only, now have feminine designs of ruffled peter-pan collars and silk fabric. As far as I know, top hats, ties, and suits are very much masculine and remain so, even today. The bottom line is quite simple, if you are seeking to look and act like a man, you will want to wear his clothes. God forbids it and calls it an abomination to Him. But if you enjoy being a women, you should and will seek to dress in women’s clothing.

As we look at the Strong’s definition, we must take note that this goes beyond clothing. It includes anything that is man’s, his vessels, armor, bags, stuff, and tools. It could also forbid women from taking up certain masculine jobs where they have to handle and carry men’s tools or armor, and wear their clothing. And all that vice versa for men. Of course, some tools and jobs overlap what men and women to do. A woman can plant, garden, and drive a mower. A man can wash dishes, fold clothes and cook a meal. But at the core of each of them, they do not desire to have the other’s gender and role and that is going to play out quite noticeably for all to see.

So what does it all mean?

Men are to wear men’s clothing, be masculine and embrace being a man.

Women are to wear women’s clothing, be feminine and embrace being a woman.

All the while both in modesty.

I have found that women’s pants designed for women tend to be tight and cut to fit our curves which can often become immodest. But one can make them modest and feminine by throwing on a long flowing tunic, or get them with less tightness. Although I like to offer caution about baggy clothing as it tends to be shapeless and masculine. The goal should always be feminine, so if my pants look like I could have bought them in the men’s section, no thanks! If you believe that for yourself you can’t make pants feminine and modest enough to wear, then don’t wear them. So this should also apply to shirts, coats, jackets, boots, hats, and blazers. Does our culture still consider dresses and skirts to be only feminine? Yes, it does. So maybe we could all consider adding a few more of them to our daily wear.

Side note: something else to consider is that fabrics can tend to be feminine or masculine. Soft, flowing, and pretty are feminine. Tough, dark, and plain are manly. I know there are certain people who think that even jean skirts are still masculine because of the hard fabric of jean originally designed for men. By the 1870s, the blue jeans were considered daily wear for California’s miners, farmers and cattlemen. But again, culture has changed, there are now softer jean pants to chose from if you desire to wear them. Men’s pants are straight and tougher fabric. Women’s pants are usually shaped and softer fabric. You can definitely notice if a guy is wearing girl’s pants. Last thing, sorry but not sorry to say ladies, I don’t think we can ever make camouflage feminine, even if it is a skirt. That’s just not happening. 😉

For those who will say I’m just picking and choosing what I like, or that it’s just my opinion what is considered feminine and or not, I challenge you, if you are going to pick the 1950’s as the most biblically way to dress, why not the 1400’s? Where is the justification Scripturally for either? I am open to be corrected by Scripture.

So to sum this all up, I believe we can indeed heed the warning of Deuteronomy 22:5 now more than ever before as our culture sinks lower into extreme gender confusion and transgender poison.

Like never before, our culture needs to see women enjoying being female, and men enjoying being men. So, as women, we should look into our closets, go beyond the pants issue and ask ourselves, does ALL my clothing honor Christ in modesty and feminine glory?

Because according to Deuteronomy 22:5 from your head to your toes, it should.