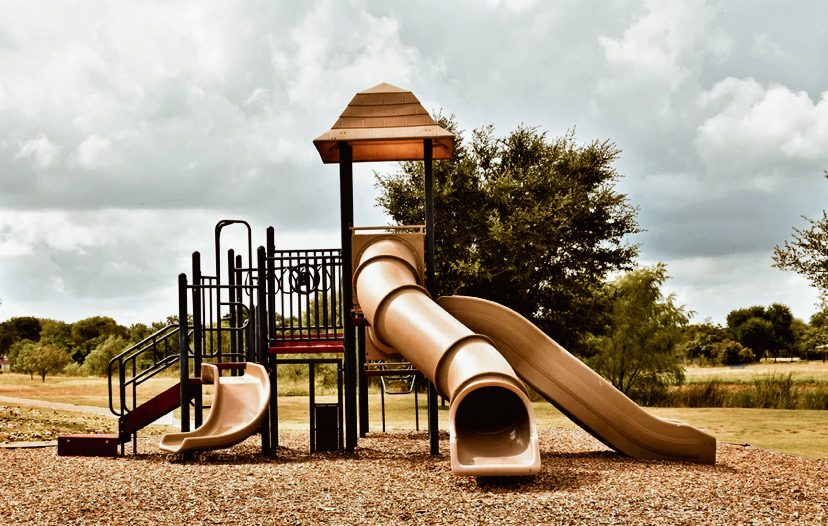 Our frequent guest author Sarah Bruce is back sharing with us stories of her evangelism encounters. I hope and pray they inspire and encourage us to go seek and save the lost as we go about our everyday lives.

The playground was enormous, but the slide was bigger! This was no ordinary slide. In order to go down this slide, one must:

1) climb a flight of stairs,

2) turn right and climb another flight of stairs, passing a smaller slide,

3) turn left and climb another flight of stairs, passing another slide,

4) turn left and crawl through a tiny crawlspace that winds upward,

8) then finally have the courage to finally make it down the slide!

Can you imagine how long this would take to get up if it was crowded with little kids who frequently bailed and had to have their parents come get them? How long do you think it would take a toddler named Taliah and her mother amid the chaos? It took long enough to share the Gospel!

After we climbed the first flight of stairs, I gave an older girl (who was with her younger sister) a Gospel booklet. As we continued on to the next set of stairs, the younger girl commented that I had the same book as her sister! The older sister then explained that I was the one who gave her the book, and our Gospel conversation started as we headed past the last flight of stairs and continued on through the crawlspace. The older girl was named Madeline, I learned as the crowd of children backed up in front of us. She didn’t know much about the Gospel, but she just started a class on it through homeschooling. As we made our way through the spaced-out boards I went through some of the Ten Commandments with her, and she readily admitted her guilt before God. Just as we were climbing through the straight opening, I was able to share with her about how God became man in the person of Jesus Christ, and I encouraged her to think about the importance of repentance in light of eternity. Before we finished through the maze, she said she had never thought about eternity like that before, and I encouraged her to look at the resources I gave her!

It was so awesome, and I’m so thankful to the Lord for that day when my daughter was willing to go down that long, intricate slide! Someone got to hear the Gospel because of it! But you don’t need to be IN a slide to share the Gospel or have every day-life witnessing encounters…

Here are some stories of sharing the Gospel naturally, through a mere act of walking up to someone in a public area, offering a Gospel tract, and sitting or standing with someone and giving them the truth of Scripture.

Before leaving the park the other day, I was praying for a conversation, then I saw a lady sitting by herself on her phone while her children played in a little sandpit. So, I came up and asked if I could talk with her. I sat with her and her kids (they played with my daughter Taliah) and gave her the Law and the Gospel. She had a slight language barrier (Spanish), but she opened up to me quite a bit about what she was going through in her life. I am so thankful God allowed us to talk!

As Taliah played in the play area at the mall, I was able to find a lady on the bench who was watching her kids alone. I introduced myself, and she agreed to talk, her name was Teselin. We talked through what the purpose of the Gospel is, and I tried to explain that the purpose of Jesus coming was eternal; He didn’t just come to perform miracles. We also talked through how we don’t measure up to God’s Law, the Ten Commandments, so we don’t deserve heaven. At the end of the conversation, I pray that she had a deeper understanding of the true God of Scripture.

While strolling along at a local shopping center, Taliah and I came across two teenage girls, so I offered them a tract and started talking with them. Their names were Aleena and Sophia. I was able to talk them through the Law and the Gospel. Aleena was more talkative, and she thought she had good intentions, but she admitted to lying, stealing, and blasphemy. She said she thought Jesus was the Son of God, but not God, or at least not God exclusively. I shared with her why He is God, and I explained the importance of repentance, using the cliff analogy.

The cliff analogy is simply that everyone who is not saved is running towards a cliff (hell) without stop. If I really believed that (and I do; hell is even more serious and painful than jumping off a literal cliff) I shouldn’t have any hesitations about sharing my faith… wherever I go!

The girls seemed to understand, so that was very encouraging. They left that day with some potential physical goods, but most importantly, they left understanding more about spiritual goods, and for that reason I’m so thankful they “happened to go there” at that time! God knows what He’s doing! Please consider praying for these individuals today.

If you want more ideas, another example of a good place to go is the library (if they have good play-areas for children). Because you have to be somewhat quiet, I usually have Taliah “doing the evangelism for me” by giving her tracts to give to a friend she’s made. I can then gauge how interested the other mom is in talking based on how they respond to her. I can still remember a specific, amused laugh a mom gave my daughter because of a Gospel tract!

Why do I share these stories? I share them for your encouragement to go share the Gospel while you still have breath! Don’t forget the number one thing: prayer! Don’t be discouraged if you can’t get people who will talk to you. When you don’t have the time, Gospel tracts save the day! Could I encourage you to get some, if you don’t have any already? If you get appropriate tracts for the right settings, you wouldn’t believe how receptive some people can be to mere pieces of paper!

For example, what’s stopping you from giving the worker at the check-out of the store a tract? All moms have to go to the store, right? Sometimes, when we go to the store, my daughter gets really excited in the check-out line because she sees a puppy on the wall (they have a vet clinic ad). Because her excitement draws the attention of others, it has been a great opportunity to give the workers (who are usually laughing at her) Gospel tracts! Other times, even if she’s tired or not having a very good day, I can still be a witness by not getting upset with her, modelling godly parenting, and then still giving a tract, even if there isn’t much conversation! You can do the same!

For further information on good tracts, I would recommend this website: Living Waters Store link:http://store.livingwaters.com/catalogsearch/result/?cat=&q=Tracts)

If you do get rejected, and you will- maybe even quite a bit, don’t be discouraged! Remember that God is glorified (as long as your motives are pure) in the act of sharing the Gospel verbally, or even the passing out or placement of His Gospel through Gospel tracts. Evangelism can be scary, but it is necessary (Matt 28:18-20, Acts 1:8, 2 Tim 4:2), so please consider creative ways to share the Gospel today! You never know who you’ll find… from the playground slide to the grocery store line!

Author: Guest
Filed Under: Evangelism
The Great Commission is for Introverts too
Missional Motherhood: The Story of Catherine Booth